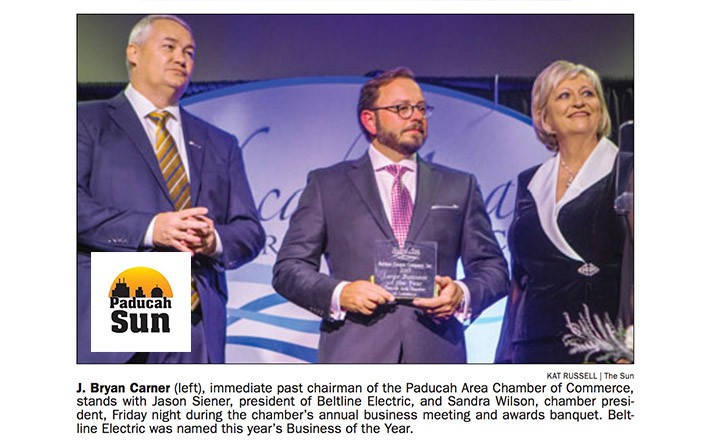 Jason Siener has been around the construction business his whole life. His father, Jay, worked for Billy Harper and Harper Construction, and he spent summers as a general laborer, involved in allkinds of tasks from working with concrete to sweeping out the shop, “whatever needed to be done.”

Siener, 41, grew up in Gilbertsville. He attended the University of Tennessee at Martin, and played golf in college. “I thought I was going to be a professional golfer,” he said. “I found out quickly that was never going to happen.” However, the construction business did seem to come naturally, according to Siener. “I ended up working for Billy Harper for many, many years (at Morsey Construction),” Siener said, of his tenure which culminated with being named president/CEO in 2006. Since Morsey was a subcontractor for Beltline Electric, Siener developed a strong relationship with Beltlline then-owners Terry Gipson and Lyn Smith.

As that relationship grew, and Siener sought advice on the process of acquiring a business of his own, the talks took a new direction. “They called, and we talked about my potential interest (to succeed them as owner) and how they would be interested in assisting and helping me with the transition ” Siener said. He purchased the company in May of 2010.

“Those are not always easy acquisitions,” Siener said. “Sometimes previous owners make their sale and move on. They don’t want to be part of the next generation (of owners).” However, that was not the case with Gipson and Smith, who continue to be actively involved in daily operations as well as being minority owners. “They’ve helped in all sorts of ways … they’ve stuck with me,” Siener said. “They’ve strapped their boots on and helped me grow the business.” And grow it has. Since purchasing the business, Siener has doubled the firm’s size and is expanding services and employees. With a focus on customer service and building client relationships, Beltline has opened a Nashville office, in addition to existing offices in Paducah and Owensboro.

The company serves multiple niche markets, according to Siener, as a certified health care contractor, institutional contractor (universities, schools, etc.) and industrial contractor, among others. The company is featured in the 2014 fall edition of US Builders Review, highlighted as one of the premier electrical and mechanical contractors in the Southeast, “with a geographic footprint stretching from southern Illinois to central Alabama.” The company has been involved in some high-profile regional projects such as the Owensboro Medical Health System’s new 450-bed hospital, and the new, state-of-the-art Owensboro Convention Center. “That was a big job,” Siener said, of the convention center. “A lot of credit goes to the mayor and city of Owensboro for funding the construction and having the vision of developing that riverfront.”

The company has also been involved in the construction of American Municipal Power’s Cannelton hydroelectric generating plant, and does work for the Tennessee Valley Authority in its combustion turbine and coal-fired power plants, and customer service locations. Total employment over the past year has been between 325-350, according to Siener. In addition to being involved in local projects such as the new Superior Care Home facility in Commerce Park, a lot of other projects are coordinated out of the Paducah headquarters. “We’re really trying to grow our home base,” Siener said. “Projects that may not fit in the Owensboro or Nashville office come through here (Paducah). We can work on jobs on the east coast out of Paducah. “We’re proud to have our corporate headquarters in Paducah, and we’ll be proud to have a part in the next big thing in Paducah whether it be a hotel, development at the riverfront, or the USEC transition (Paducah Gaseous Diffusion Plant),” Siener said. Another area of opportunity is the number of companies supported by the chemical industry, according to Siener. “Beltline is fortunate to enjoy relationships with many of the production facilities (in that industry) throughout western Kentucky and southern Illinois,” Siener said.

Siener also recently purchased Rick’s Electric in Mayfield, a regional leader in industrial automation serving another unique niche market. Rick’s will operate as a stand-alone company, but complement Beltline’s business. “I like to have a lot of balloons in the air,” Siener said of the multiple projects his company is involved in at any give time. He credits his wife, Leigh Ann, daughter Charli, and identical twin sons Kip and Kase for being understanding as he works to grow the business. “We’re on a journey with this business,” Siener said. “I’m having a ball every day.”